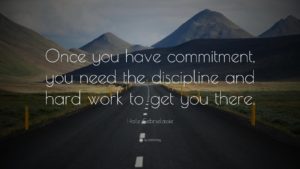 As much as imagination is a necessity to acting, where does commitment fit in?

Both Greg and myself have been in this industry for over 90 years collectively! That’s a long time!

And we’ve learned a thing or two about the little things that help an actor succeed.

The three most important things in acting and in life to achieve success, is commitment, discipline and plain old hard work.

For instance being late by 5 minutes or so for an audition due to traffic is understandable, but being half an hour late or longer is not! The excuse ‘sorry  the dog ate my script’ just doesn’t cut it!

It shows both lack of discipline and lack of respect for the audition process. It also shows us that you are not willing to commit.

I do not believe either discipline or commitment can be learned.

They are both an attitude and a choice which cannot be taught at drama schools or workshops.

Without both these attitudes you are born to fail as an actor.

Firstly, as I have been pushing the barrow for so long now, the art of acting is a collaborative process. A team sport so to speak.

From the audition process and rehearsal process onwards, the discipline and commitment of the actor is needed and expected.

Lets face it, with imagination and experimentation, comes risk. Comes fear of failure. If a team member is not punctual, is not 100% committed it pervades throughout the entire cast.

The rehearsal process is possibly one of the most important aspects of the performance process.

If the trust is broken during this time, then the freewheeling imagination and trials are not supported, and so hesitancy builds.

Only through an atmosphere of trust, can you fully extend the imagination and take the most daring of choices.

Acting is nothing without interacting. It is the essence of our work as actors.

Commitment means learning your lines, showing up on time, sharing generously your work with your cast members, doing your character homework and treating yours and cast members work seriously.

This is discipline. This is commitment!

It is not something you turn on and off like a tap whenever you work. This is a life commitment. Something you need to practice and perform every day. Yes you may be taught the importance of both commitment and discipline, but I say again it is an attitude.

An attitude that every actor needs to self teach.

Gain access to free webinars, exclusive tips, course discounts and much much more!

Thank you for subscribing!